McFall family researchers have been studying Cornelius McFall as a possible father for Great Grandfather Thomas McFall for at least twenty years. I have been among that group for quite some time. While I successfully gathered records for Cornelius, I have struggled to find any documentation linking Cornelius and Thomas.

So, in today’s blog, I’ll tell you what I know about Thomas McFall and hope you can help.

I first learned about him when I employed Mrs. Katherine Bushman, from Augusta County, Virginia to uncover my ancestry in 1991. She quickly traced my Great Grandmother Flora Belle (McFall) Joseph to James Addison McFall to David McFall to 4th Great Grandfather Thomas McFall.

Thomas was born about 1790 in Virginia and died February 3, 1854 in Augusta County, Virginia where he resided for many years. The Staunton Spectator and General Advertiser printed his death notice March 8, 1854.

In this county, at his residence, on the 3d of Februa-

was formerly of Albemarle, but had been a resident of

this county for the last thirty years.

To set the record straight, he had been an Augusta County, Virginia resident for more than thirty years. Records indicated it was forty-two years. I found him in an 1812 Augusta personal property tax list when he was a young man about 21-22 years old.

Thomas had documented connections to Albemarle County, Virginia dating back to August 1814 when he married in that county. A marriage bond dated August 23, 1814 declared his intention to marry 4th Great Grandmother Nancy Hall, daughter of the deceased James Hall. 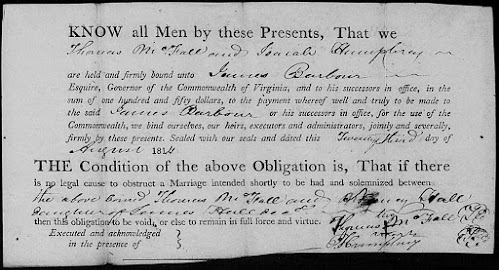 By the way, Albemarle is where Cornelius McFall lived as early as the American Revolution casting a research trail that I would follow looking for a 5th great grandfather.

I have not been able to find the McFall’s in the 1830 federal census but know Thomas remained in Augusta County as I found him in the 1830 personal property tax list. During the 1820’s two more children were born—Mary Jane in 1821 and Isaiah 1825.

By January 12, 1832, Great Grandfather was a widower and married widow Ann (White) Smith in Augusta County.

The 1835 Augusta County, Virginia personal property tax lists included Thomas as well as his eldest son, James McFall. James must have been about 21 years old to be taxed on his own behalf. James and Thomas both were taxed in 1836. In 1837, Thomas’ sons John and David McFall appeared in the county tax lists. Thomas, sons David and William were taxed in 1839.

Augusta County was still home to the McFall’s per the 1840 federal census:

The older McFall sons no longer lived with their father, but I was surprised to see the youngest boy, Isaiah (about 15 years) was not in Thomas’ home either.

District No. 2 and 1/2; Augusta County, Virginia

After Thomas’ death, his widow Anne, initiated a chancery cause to have her dower rights assigned to his estate. The Staunton Spectator published details of the case in their April 25, 1855 issue: 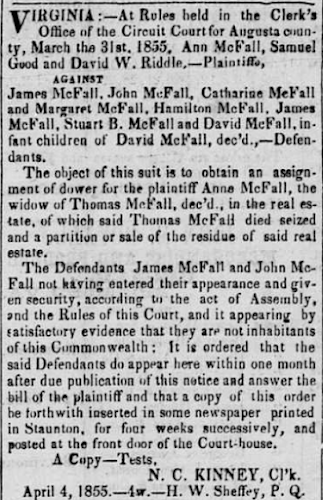 VIRGINIA ;--At Rules held in the Clerk’s

Office of the Circuit Court for Augusta coun-

McFall, Stuart B. McFall and David McFall, in-

The object of this suit is to obtain an assign-

ment of dower for the plaintiff Anne McFall, the

widow of Thomas McFall, dec’d., in the real es-

and a partition or sale of the residue of said real

Fall not having entered their appearance and giv-

en security, according to the act of Assembly,

and the Rules of this Court, and it appearing by

satisfactory evidence that they are not inhabitants

of this Commonwealth:  It is ordered that the

said Defendants do appear here within one month

after due publication of this notice and answer the

bill of the plaintiff and that a copy of this order

be forthwith inserted in some newspaper printed

in Staunton, for four weeks successively, and

posted at the front door of the Court-house.

Thomas’ daughter, Mary Jane and husband James Dalton had already sold their interest in her father’s estate to Samuel Good prior to the chancery suit. The same was true of William McFall and his wife Susan in October 1854 when they sold their interest to David W. Riddle. Isaiah McFall predeceased his father dying in 1847.

The October 15, 1856 edition of the Staunton Spectator and General Advertisers reports on the pending Commissioner’s sale of Thomas McFall’s land. 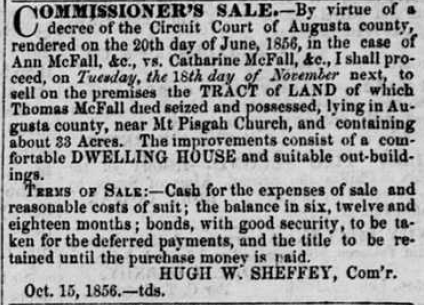 COMMISSIONER’S SALE.—By virtue of a

decree of the Circuit Court of Augusta county,

ceed, on Tuesday, the 18th day of November next, to

sell on the premises the TRACT OF LAND of which

about 33 Acres. The improvements consist of a com-

TERMS OF SALE:--Cash for the expenses of sale and

reasonable costs of suit; the balance in six, twelve and

eighteen months; bonds, with good security, to be ta-

ken for the deferred payments, and the title to be re-

tained until the purchase money is paid.

William White Died at the Residence of His Father

William White, a wagon maker from Mt. Sidney, Virginia died a young man leaving a widow and three young children who would become Defendants in Augusta County, Virginia chancery cause 1858-071 Nicholas K. Trout vs. Heirs of William White. You can read about the suit here.

It is odd but William White’s date of death was not included in the court papers. I knew that he had died by October 25,1855 because this is when the chancery cause was initiated.

Recently I located a death notice published in the June 30, 1852 edition of the Staunton Spectator stating William passed June 14, 1852:

DIED, at the residence of his father, in Mt. Sidney,

I have always suspected his father was Clement White, a wagon maker, living next door to William and his family per the 1850 federal census enumeration. 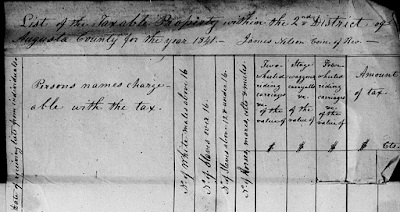 Commissioner James Nelson’s List of Taxable Property for the 2nd District of Augusta Co., VA included William White and Clemens White (at the bottom of page 41). When a commissioner encountered two men in his district with the same name, he usually tried to distinguish the men in some manner. This is why you see “(of C.” after William’s entry. It means Wm. White was a son of Clemens White. 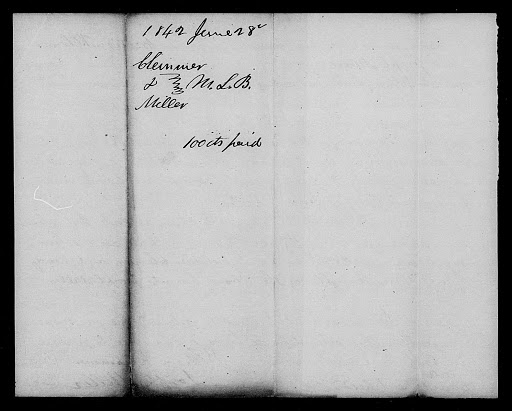 Know all men by these presents, that we William K. Clemer

unto John McGregory Lieutenant & acting Governor of the commonwealth

and his successors for the use of the commonwealth, we bind

ourselves our heirs executors and administrators jointly and

severally firmly by these presents. Witness our hands and

The condition of the above obligation is such that where

as a marriage is shortly intended to be had and solem-

nized between the above bound William Clemer, and Nancy

Jane Miller, daughter of the above bound Joseph Miller

riage then this obligation to be void otherwise to remain

in full force and virtue. 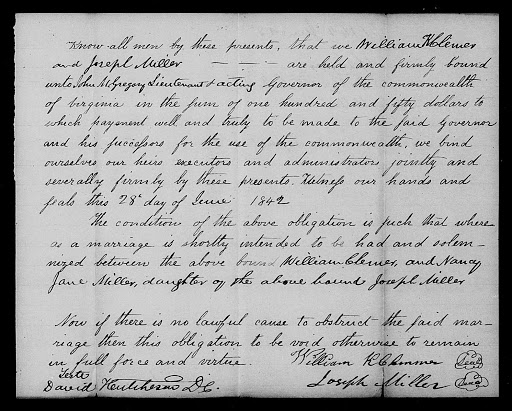 Bridesmaid is Wedded When her Duties Ended

BRIDESMAID IS WEDDED
WHEN HER DUTIES ENDED

Goshen, Sept. 16—The wedding at the Clark home on Mathew street, Monday afternoon, turned out to be a double one. Besides the marriage of Miss Nettie Clark to F. V. Cook, there occurred also the entirely unexpected uniting of Miss Clara Fitzgerald, of Middletown, to A. Vanderslith, of Paterson.
The guests had all assembled for the announced wedding, which was to occur at 3 o’clock. Mr. Vanderslith was one of these, while Miss Fitzgerald was to be bridesmaid.
For some time this couple have been seen in each other’s company, but no serious steps had been taken to prepare their friends for Monday’s happening.
At about 2 o’clock, Mrs. D. P. Clark, mother of the bride, in a joking way, suggested that this couple be married at the same time. To the delight of all the suggestion was adopted.
Mr. Vanderslith then made a record dash up-town, procured a license and the ring, and, the four were made two by Rev. J. C. Coddington, of the Methodist Church.
The Clark-Cook marriage was told about in the Times-Press in yesterday’s issue.
Mr. Vanderslith is an employe of a large manufacturing concern in Paterson, and was soon to leave on an extended business trip—this probably hastened his decision in favor of immediate marriage.
The home was beautifully decorated and the marriage—or marriages—took place under a beautiful arbor. After the double ceremony, the entire party adjourned downstairs where a bounteous wedding feast, prepared by Mrs. Clark, was served.
The two couples then left on their wedding trips, after being wished all the good luck in the world.
Mr. and Mrs. Cook will go for a short trip through the West, and will reside in Port Jervis. Mr. and Mrs. Vanderslith will spend a short time in Walden and vicinity, after which they will leave on the business trip before mentioned. 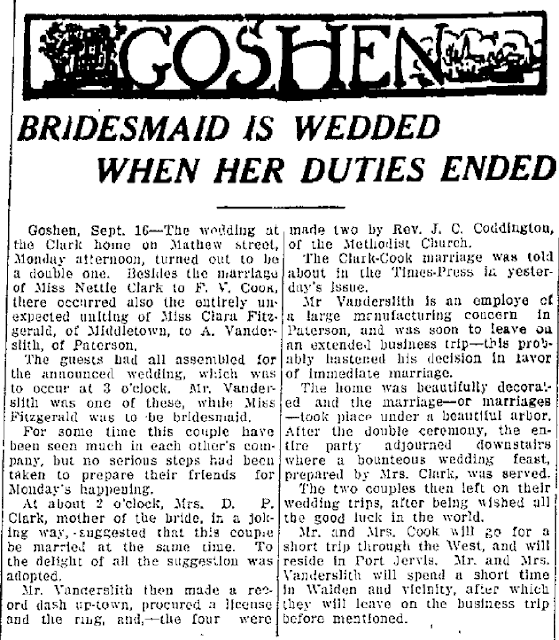 Happenings at the County Seat—All the
Latest News

Miss Nettie A. Clark, aged 10 years,
gave a lawn party Thursday afternoon
at the home of her parents, Mr. and
Mrs. David Clark, to forty of her little
friends and companions. The occasion
was a happy one for all present. Re-
freshments were served and in the
evening the whole party was given a
straw ride and attended the band
concert. Among those entertained by
the little hostess were Annie Maguire,
of Brooklyn; Ethel Clark, of Paterson;
Lizzie Stalter, of Warwick; Gertrude
Kane, of Chester; Ethel Keenan and
Nellie Hewitt, of Middletown, and Ella
Wilson, of Hartford, Conn. 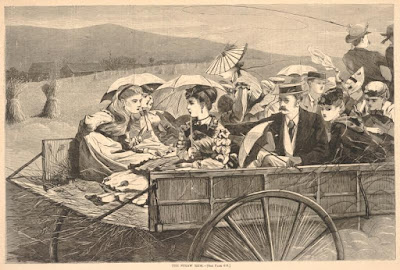